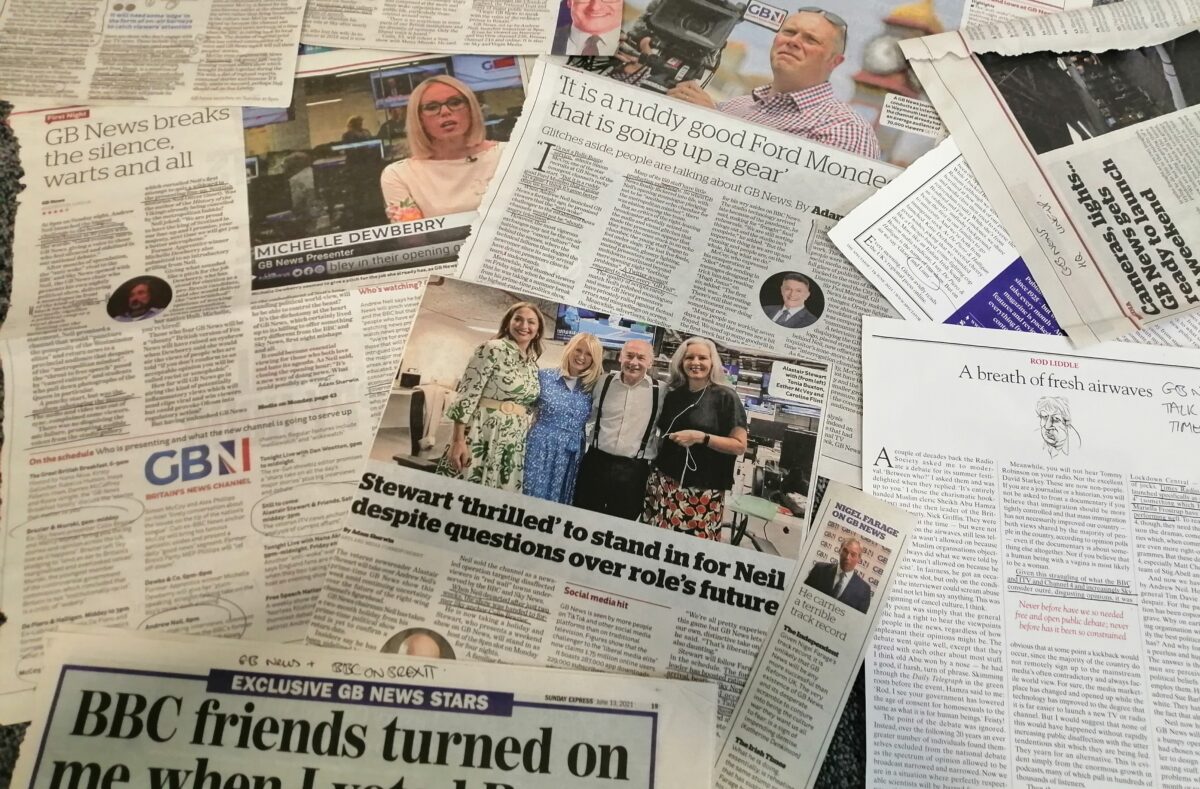 The Andrew Neil-fronted GB News channel launched on Sunday – essential viewing for media relations types.  A new right-of-centre 24-hour television channel centred on presenter-led shows with presenters like the BBC’s Simon McCoy and former ITV presenter Alastair Stewart is a big deal and I was glued to my set at 8pm.

God, I was disappointed.  I am a sitting duck for GB News.  I read the Speccie and respect Andrew Neil.  I loved the launch of Times Radio.  I am a floating voter but I hate the Guardian comments section.  I think Guido Fawkes is hilarious.  I like Talk Radio.  I’ve never worked in the public sector and I am more patriotic than my friends who do.  I have a view on the Express, based on having read the Express.  Other than drinking nice coffee for the taste (dangerously continental), I tick almost all the boxes to be classed as prime gammon.  So I was excited by the biggest development in UK broadcast news since the launch of Sky News.

And it was… crap.

Brillo came on to do his monologue.  That was thoughtful enough if fairly predictable – meaning it was all about the presentation.  Neil was set against a black backdrop.  My first thought was, “Did they forget the set?”.  My second was, “Weird choice – black looks shit on TV”.  My third was that, while the blue line that ran vertically down the back wall was pin-sharp, Andrew Neil’s face wasn’t in focus.  Holy shit!  The quality of the picture and the lighting were abysmal.  Who was in charge?  Why wasn’t this stuff being fixed? Is the director an unpaid intern from a student TV channel?

Then Neil introduced the hosts.  First up was Michelle Dewberry.  From The Apprentice.  After Brillo, that’s who they rolled out?!  My parents were watching the launch at home and we were WhatsApping together.  Gammon friends say Dewberry’s Twitter feed is great but I was embarrassed to admit to my folks that Host 2 was a reality TV star.

Then came Neil Oliver.  That was just weird.  And his sound didn’t work.  Kirtsty Gallagher was out of focus, too (not the bookshelf behind her though – nice)…  Are the cameramen all on drugs?  Haven’t they done any run-throughs.  Or rehearsals?

Colin Brazier brought a sense of quality back to the proceedings, as did Simon McCoy.  But Dan Wooton was a step down.  He looked like an absolute nutter, oozing naked ambition.  You could almost smell his greed for fame – it was tangible.  At least he was in focus; his teeth couldn’t fail to be, I suppose.

Tom Harwood is a great addition to the line-up; I like him.  But again the camera spent most of the time focussed on the back of his head.

About three-quarters of an hour in, someone said something about stories being “much more richer” and I was close to turning it off.  I felt insulted by how cheap and nasty it was.  I was so cross.

Eventually, they rolled out Alistair Stewart and he proved a class act.  But by then I felt the channel had played its hand.  And the hand said, “naff”.  By the time Wooton’s slot came up at 9pm, I’d had enough.

Yesterday, that’s Monday, GB News were still struggling to play clips and the studio guest’s mics only seem to work about half the time.  The more you watch, the more there is to spot.  The clock isn’t centred in the box.  The ticker is too big.  All the on-screen graphics will play havoc with my TV – especially as the ticker is on during the breaks.

GB News isn’t quite Arise (Sky 519), but it isn’t far off.  By way of comparison, Iran International knocks it into a cocked hat.  You don’t have to speak Farsi to see that Iran International (made in London) is a proper TV channel. The sets are nice.  You can hear what people are saying.  You can see the presenters’ faces.  The presenters are in focus (God, does this need saying?).  Someone, somewhere is paying attention.

If anything, the digital side of GB News was worse.  Andrew Neil’s welcome letter to viewers wasn’t working.  Three hours in and the app was still just showing promo videos.  Today, Tuesday, they still don’t have news on their app. Sweet Jesus.

I don’t know if all this is fair.  I come from a faintly meeja family; media relations is part of my job; I have friends who work in TV.  I’m not a million miles away from being inside the bubble.

But I found the GB News desperatly frustrating.  One non-media friend said, “It looks like a deliberate expose of just how hard it is to make news look slick and natural”.  Well, quite.  Rival media outlets have been way, way too lenient in their reviews of the launch.  One review compared GB News to The Day To Day from Brass Eye.  I’m afraid GB News just isn’t that slick. I have seen better produced YouTube channels.

On the plus side, this morning I clocked Rod Liddle had been smoking live on air last night.  That’s something. Afterall, when was the last time you saw someone smoking on TV.

James Staunton is the founder of Air Cover PR, a B2B comms agency specialising in the creation of thought leadership content and corporate PR for businesses in the mortgage, property and HR / employment spaces.  Please Contact Us to find out more.